Anne with an E Wiki
Register
Don't have an account?
Sign In
Advertisement
in: Characters, Season Two Character, Male Character,
and 3 more
English

Signs are Small Measurable Things, but Interpretations are Illimitable

Cole Mackenzie is a budding artist who is constantly harassed at school by Billy Andrews and even worse, by their teacher Mr. Phillips. Cole would like nothing better than to be left alone to draw, but the once-abused Anne recognizes that loneliness and befriends him. [2]

Cole is a young boy discovering himself and his place in the world. Talented budding artist, Cole has a bright mind and a keen imagination. On the flip side of the coin, Cole suffers in solitude his own diversity, wishing to be anonymous and normal, much to Anne's displeasure, since she considers Cole unique and special, considering him a kindred spirit.

Despite being of a peaceful and solitary nature, Cole susceptible to fits of anger, triggered by the much suffered harassment by schoolmates and, in particular, of the teacher, Mr. Phillips. Cole's loneliness makes him a skilled observer of reality. This quality is useful both in understanding people at a first glance, as well as in outlining realistic portraits on paper.

Cole is a thin and slender boy, but he is the tallest of his classmates. He has reddish blond hair, a pale complexion and blue eyes. He wears simple clothes, indicating a more rustic upbringing when compared to other schoolmates coming from wealthier families. After moving in with Josephine Barry, a very wealthy woman, he is dressed in more chic and distinguished clothing.

Cole, due to his discretion and seclusion, is often bullied by his classmates, especially Billy Andrews. On the first day back to school, Billy spills ink on Cole's drawing, leading Mr. Phillips to punish Cole for not paying attention in class. Anne is intrigued by Cole's talent. During lunchtime, Anne and her friends join Cole, breaking his solitude and initiating a friendship.

When Cole helps Anne with her hairstyle in class, Mr. Phillips humiliates Cole for his "feminine proclivities", and orders him to sit with the girls. Cole notices that Mr. Phillips punishes him for no other reason than being different. Anne calls him a kindred spirit, relating to his uniqueness, to which Cole answers that he'd prefer being ordinary.

When Josie Pye offers for Cole to kiss her, Cole declines, and Josie calls him a "freak". Anne defends him, and Cole is touched by her loyalty and her own peculiarity. During a game of spin-the-bottle with the rest of the class, one of the students refuses to kiss Anne. Cole then volunteers, and Anne kisses him on the cheek, much to Josie's displeasure.

Cole is entrusted with the sets for the Christmas pantomime. While Cole is painting the sets at the Town Hall, Billy intentionally knocks him down his ladder, and Cole breaks his wrist. Unable to draw, his classmates offer to help him with the remaining sets. But Cole's wrist isn't healing fast enough to his taste: when trying to draw in Anne's Storybook Club forest cabin, taken by a surge of rage, he throws his drawings into the fire. Anne saves them in time, as Cole reveals he is abandoning art, although Anne discourages him from doing so.

Cole accompanies Anne and Diana to Aunt Josephine's party. Once there, Cole is surrounded by artists and eccentric individuals. Drawn by a certain sculpture, Cole converses with its creator, who urges him to start doing pottery for his wrist, and reassures him that his talent will never be lost. A conversation with Aunt Josephine about her romantic soulmate, Gertrude, moves Cole, and leads him to come out to her as gay. Once back in Avonlea, Cole starts making pottery, and takes a liking to it.

When Cole stumbles upon Mr. Phillips in an empty room at school, they share a short, disturbing moment of intimacy, which Mr. Phillips breaks by telling Cole that he "disgusts" him. That same day, Billy breaks a school window with Cole's clay, which Mr. Phillips expects Cole's parents to pay for. When Cole announces that his parents can't afford it, Mr. Phillips changes his punishment to a stick beating. Cole refuses to take his punishment, and stands up for himself before leaving. Cole won't return to study after this incident. He explains to Anne that Mr. Phillips hates him due to his own queerness and internalized homophobia. He then comes out to Anne. Both promise to platonically marry if they never find romantic partners.

After Anne tells Miss Stacy, the new teacher, about Cole's difficulties with Mr. Phillips, which led to his absence, Miss Stacy visits the Mackenzie family. However, Cole's parents are unaware that he no longer goes to school. When his mother confronts him, he runs away, making his way to the cabin. Upon his arrival there, he meets Anne, and discovers that the cabin and his sculptures have been completely destroyed. He accuses Anne of selling him out. Noticing Billy's green scarf on the floor near the remains, Cole runs to the schoolhouse and attacks him. Billy burns his ear on the stove, and Cole, overwhelmed, escapes to the seaside cliffs. Anne follows him there, and he shares his feelings of solitude, believing that there is no place for him in the world. Anne consoles him. He later goes to the Andrews' household to apologize to Billy.

Cole now works for his parents' farm. He joins Anne, Diana, Ruby and Moody on their way to Charlottetown in their mission to save Miss Stacy. Once off the train, on which Gilbert was also traveling, Cole tells Anne that Gilbert has a crush on her, before setting off to visit Aunt Josephine. Aunt Josephine offers for Cole to live with her, which he accepts. Although he leaves his friends and family behind, he knows that, contrarily to Avonlea, he can freely learn to be himself in Charlottetown.

Cole lives with Aunt Josephine and goes to art school in Charlottetown. When Anne decides to do some research about her biological family, he accompanies her to her old orphanage. Anne has a breakdown after realizing that her parents might not be dead, but instead have abandoned her, and accuses her imagination for making her believe foolish things. Cole comforts her, telling her that her experiences and imagination are what give her such empathy, and the reason why she understands and accepts him. Anne wants to make sure that her parents are dead and that she was indeed loved: Cole suggests for her to check in the church, where they have records.

Anne opens a letter at Aunt Josephine's house, which will reveal whether a kirk in Scotland has more information on her parents: the letter being inconclusive, Anne shows herself to be incredibly graceful. But Cole knows that Anne is saddened, and comforts her as she sobs privately in his arms. 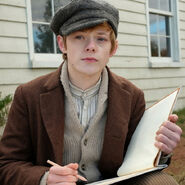 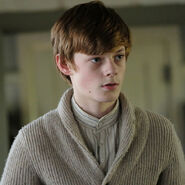 “It would only make sense that there would be somebody in the class who was struggling with identity,” she said. “It was just unimaginably difficult to do so especially during that timeframe where it was illegal to be a homosexual, punishable by imprisonment and a death sentence – and punishable in Canada until 1969. I was very keen to include a storyline like that.” [2]