Anne with an E Wiki
Register
Don't have an account?
Sign In
Advertisement
in: Stub Article, Characters, Main Character,
and 5 more
English

Gil (by everyone)
Bud (Billy Andrews)

Anne Shirley Cuthbert (girlfriend in the series) (wife in the books)

But What Is So Headstrong as Youth?

Gilbert has black, curly hair, hazel eyes and discreet freckles. He is of average height. Gilbert is usually seen wearing suspender pants with a shirt, vest and boots. When outdoors, he wears an Aegean hat, and has a red and black checkered coat for cold weather.

Gilbert is very intelligent. He shows a strong curiosity for the world around him, and a thirst for knowledge. Well-liked by many, he has a profound ability to empathize with others, and cares deeply about his family and friends. Respectful, well-mannered and gentle, Gilbert always lends a helping hand. He is passionate, ambitious, and determined to achieve his aspirations. Although quite playful and teasing in Season 1, he grows to be more mature and serious after his father's passing, but maintains a characteristic sense of humor. Throughout the series, Gilbert demonstrates unwavering kindness, loyalty and honesty.

Gilbert's first appearance shows him saving Anne from Billy Andrews' threats while they were on their way to school. Intrigued by this unfamiliar face, Gilbert desperately tries to gain her attention. He immediately takes a liking to her: he talks to her, despite her apparent refusal to engage in conversation, offers her an apple from his orchard, or pulls her hair and calls her "carrots", which costs him a blow to the head from Anne's chalk slate. From that point on, Gilbert and Anne start a love/hate relationship, wavering between friendship and enmity, fueled by an academic rivalry.

We later learn that Gilbert has been left to take care of his family's farm after his father fell ill. They moved to Avonlea after the passing of his mother and brothers. Gilbert's father's state deteriorates, and he eventually passes in the winter of 1896, making Gilbert an orphan and the last surviving member of his family.

Upset and disoriented by his father's death, he leaves his home, absents himself from school and works on the docks. He decides to leave Avonlea in order to discover the world before eventually returning to his hometown. Before his departure, he runs into Anne and they decide to call a truce.

Gilbert has been hired on a steamship as a coal trimmer, and meets Sebastian Lacroix, with whom he quickly becomes friends. Sebastian often teases Gilbert about his feelings for Anne, which Gilbert denies, as she and Gilbert become pen pals.

During a stopover at Trinidad, Sebastian's country, Gilbert discovers Trinidadian food and scenery. He also witnesses firsthand the racism that Sebastian is often faced with, which will reoccur throughout the series. While exploring Trinidad, they stumble upon a woman in labor. Realizing it is too late to wait for a doctor, Gilbert delivers her baby, aided by his experience with delivering farm animals. This life-changing encounter steers Gilbert towards his destiny and ambition: to become a doctor.

Establishing he had seen enough, Gilbert prepares to return to Avonlea. He offers for Sebastian to come help him with his farm, in exchange for shelter and stability, which Sebastian accepts. Both make their way to Prince Edward Island, and Sebastian settles into Gilbert's father's old room. At Christmastime, Gilbert and Bash are invited to dinner by the Cuthberts. Gilbert gives Anne a small thumb dictionary as a Christmas gift, with a note in it referencing their spelling competitions. Once back in school, Gilbert asks for assistance from his teacher, Mr. Phillips, in order to help him pass the exams for medical school entrance, who disagreeably refuses.

Later, Gilbert brings Sebastian to see a doctor, Dr. Ward, in Charlottetown for a toothache. After treatment, Gilbert asks Dr. Ward for an apprenticeship, and Dr. Ward gladly agrees to teach Gilbert. Starting from there, and during the following year, Gilbert will go to Charlottetown every weekend for his apprenticeship with Dr. Ward.

With Mr. Philips gone, Miss Stacy, the new teacher, agrees to help Gilbert with his entrance exams, and he decides to accelerate his studies, which means he will graduate from school one year early. This creates a conflict of interest with Sebastian concerning work the farm, and animosity with a competitive Anne, jealous of Gilbert's progress in the pursuit of his ambition and at the prospect of his early graduation. Conflicted and ashamed, Gilbert decides to stay true to his word and drops the plan to accelerate his studies, in order to support Sebastian.

Towards the end of the season, Gilbert joins the students in an effort to save Miss Stacy from her removal, which proves to be successful. After Sebastian and Mary's wedding, Gilbert and Anne converse and he announces his intention to stay in Avonlea as planned, before Anne declares she has found her vocation, which resolve their tension and conflict.

The Blythe-Lacroix household is joined by Mary, Sebastian's wife, and their newborn daughter Delphine. Gilbert, after accompanying Anne to Charlottetown on his way to his apprenticeship, asks Dr. Ward's secretary, Winifred Rose, out to tea. At the end of their rendezvous, Gilbert asks for a second meeting, thus initiating a courting relationship with Winifred.

When Elijah, Mary's first son, comes to visit, Mary cuts herself with a knife while preparing food during a verbal fight with her son. After Elijah's departure, Gilbert discovers that Elijah has robbed all of his father's precious belongings. Mary develops sepsis from her cut, for which there is no cure. The Blythe-Lacroix household has to brace itself for Mary's death. Gilbert, devastated after announcing the lack of cure for sepsis to Mary, questions his ambition to become a doctor, repelled by the inescapable obligation to deliver bad news. Anne comforts him, telling him that "caring deeply will always be the right thing," and assuring him that he will be an excellent doctor. After an Easter celebration, prepared by the household and their neighbors in Mary's honor, Mary passes. Gilbert is still hesitant in his desire to pursue medicine, realizing that doctors are "essentially powerless". During a class excursion to the woods, Moody falls and cuts his leg open. As members of the Native American tribe tend to the wound with honey, Gilbert is intrigued by the use of natural remedies as medical treatment. Gilbert announces that he doesn't want to be a country doctor and watch his patients die, but he would rather study experimental medicine in the city.

Influenced by Anne, Gilbert decides to write Mary's obituary, which will be published for the Avonlea newspaper. During a dance practice for the upcoming fair, Gilbert and Anne dance together, which stirs unfamiliar romantic feelings on both sides. Gilbert is now torn between Anne and Winifred. At the Island County Fair, Gilbert meets Winnie's parents. Having connections there, her father offers to help Gilbert get into the Sorbonne, a prestigious medical school in Paris.

After Anne publishes an incendiary article on the newspaper following Billy Andrews' assault on Josie Pye, Gilbert defends Anne in front of her angry classmates, and convinces them to join her movement. The class protests to denounce the newspaper board's sexism and its banning of freedom of speech. Gilbert grows more and more hesitant regarding his feelings for Anne and Winifred.

After sitting his entrance exams, Gilbert dines with the Rose family. Winifred's father reveals that Gilbert could enter the Sorbonne come fall, with the right grades and financial backing, thanks to his contacts. He also gives Gilbert his blessing to propose. Gilbert, knowing that he does indeed have - and always had - feelings for Anne, pays her a visit during the post-Queen's exams party, and tells a drunken Anne that only "one thing" held him back from proposing to Winifred. Anne, taken aback by the sudden revelation, replies confusedly, which Gilbert understands as a confirmation that his feelings are not reciprocated. Getting the clarity he sought for on his relationship with Anne, he decides to propose to Winifred.

The day before Gilbert proposes, Gilbert visits William Barry to discuss the future of Gilbert and Sebastian's apple export business during Gilbert's absence. During that time, Anne writes him a letter which reveals her romantic feelings towards him, but it is accidentally misplaced and Gilbert never reads it.

Gilbert unexpectedly decides to not go through with his proposal to Winifred, recognizing that his feelings towards Anne are too important, even if he thinks his love is unrequited. Upon his success at medical school entrance exams, and his decision not to attend the Sorbonne, he asks Miss Stacy to help him get into the University of Toronto. Later that day, Gilbert writes a letter to Anne, confessing his love, and leaves it on her bedroom's desk at Green Gables. Anne, exasperated with Gilbert due to his lack of response to her letter, rips Gilbert's letter to pieces. Gilbert is then unaware that Anne hasn't read his letter.

Gilbert is accepted into the University of Toronto, and on his train ride there, is confronted by Diana. Diana scolds him for not telling Anne about his feelings earlier, and mentions Anne's letter. Gilbert, only just informed of Anne's confession letter, makes his way to Anne's University residence in which she had just settled in. They both meet in the residence garden, and exchange their first kisses, before Gilbert leaves for Toronto. They promise to write to each other.

Anne and Gilbert: Our eyes meet 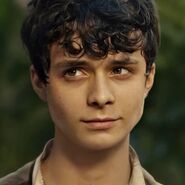