Anne with an E Wiki
Register
Don't have an account?
Sign In
Advertisement
in: Seasons, Season Three
English

A Secret Which I Desired to Divine

As the world of Avonlea continues to expand, Anne turns 16 – a momentous occasion which cements her desire to discover more about her birth parents and family history. But this new quest isn't comfortable for everyone, as Matthew and Marilla grapple with the fact that Anne may have a life outside of Green Gables.

Meanwhile, the residents of Avonlea interact with a camp of members of the Mi'kmaq nation, causing tensions to rise – and deep bonds to be forged. The future looms large as the kids enter their senior year of school – some prepare for their college entrance exams, while others set their sights on more exotic shores. But first, everyone must survive the perils of romance, friendship, first love, first kisses, and much more. Sebastian and Mary settle into domestic life, while Gilbert dreams big about his future as a doctor.

As Anne matures, she’s increasingly forced to deal with difficult topics — from gender equality to Indigenous rights — and learns that the fight to make the world a better place never ends. As the characters prepare to enter the twentieth century, some continue to look forward while others cling to more traditional ways, but one thing is clear – nothing will ever be the same again. [2]

‘Anne With an E’ Renewed for Season 3 at Netflix and Starts Shooting This Winter The series from Moira Walley-Beckett and Miranda de Pencier will begin shooting in Prince Edward Island and Ontario. [4]

Anne Shirley Cuthbert’s adventures in Avonlea will continue. Netflix and CBC announced that it has renewed the heartwarming series based on the “Anne of Green Gables” novel by Lucy Maud Montgomery. The updates series, which addresses progressive themes such as bullying, sexism, LGBTQ-identity issues, and abuse, will return for a 10-episode season.

When last we left Anne (Amybeth McNulty), she was in far better shape than at the end of Season 1 when two con men posing as boarders infiltrated Green Gables. Instead, the second season concluded on a more hopeful note after quite a bit of drama. Avonlea’s first-ever female teacher got to stay in town, Gilbert has returned, Gilbert’s friend Sebastian got married (which means Avonlea will have its first black residents), and Anne’s gay schoolmate Cole moved to live with Aunt Josephine in Charlottetown, where he’s more accepted for who he is and can pursue his art. In an interview with IndieWire, showrunner Moira Walley-Beckett hinted that romance will be in the cards for Anne for the third season.

“We are thrilled to be able to announce a third season of Anne with an E before season two premieres in Canada,” said Sally Catto, General Manager, Programming, CBC. “Anne with an E delivered a rich first season, drawing in both new and existing fans to the world of Avonlea. We have no doubt that Canadians will continue to fall in love with this beautiful and heartwarming series for seasons to come.”

“Through the storytelling of Anne with an E, the classic Canadian tale has transcended borders and found fans across our global membership,” said Cindy Holland, VP of Original Content for Netflix. “We are excited to continue our partnership with CBC and Northwood and bring the series back for a third season.”

”Our beloved Anne will be 16 years old when we return to this season full of romantic complications, bold adventures and dramatic discoveries,” said Walley-Beckett. “I will explore important, contemporary themes that I hope will continue to resonate with, and inspire and uplift, our audience.”

“We’re super thrilled that this series has resonated in 190 countries,” said Miranda de Pencier, Executive Producer. “I’m also very proud that we make our show in Canada with a wonderfully talented group of artists – led by the brilliant Moira Walley-Beckett. The character of Anne gives people permission to be themselves because she is so resoundingly herself. There are so many walls being built and so much fear growing in the world right now and Anne offers us a reminder that it’s okay to stay positive, be kind, and to dream, no matter how tough life gets – which is inspiration we all need.” [4]

Principal photography which refers to the bulk of the shooting of the show has begun on March 12, 2019.

New this season, however is an independent, resilient Mi’kmaq girl named Ka’kwet who befriends Anne. To find the perfect ‘Ka’kwet’, Anne with an E producers and casting team conducted an open-call search across Canada. Two hundred and thirty candidates auditioned in person or via tape, from coast to coast. Shortlisted actors were invited to take part in an acting workshop in Toronto, where the producers and casting team landed on Kiawenti:io Tarbell, a Mohawk from Akwesasne.

“I have always felt compelled to stretch the scope of the original book,” says series creator Moira Walley-Beckett. “Season 3 promises to be our most intense yet, with storylines about inclusion, romance, pathos, and growing pains for all our characters. It’s a big, bold season!

“There is an energetic charisma and undeniable intelligence to Kiawentiio that aligns so perfectly with the character of Ka’kwet,” says executive producer Miranda de Pencier. “Moira and I can’t wait for Anne with an E fans to meet her.”

In addition to newcomer Kiawenti:io Tarbell, veteran actor Brandon Oakes (Diggstown) has been added to the cast. [2]

The most recent update came in the middle of May 2019 when Moria shared that it’s good to be back filming after a couple of weeks break sharing a picture on the set of the new season.[6] 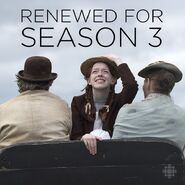 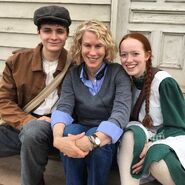